Hi all,
I just wanted to share with you one of the pay-it-forwards that I did vicariously today!

The story starts about 5 months ago my mum & I helped out at a community day for the nursing home my dad lives in! We put in heaps of hard work & helped them raise a total of about $3000AUD! As a thank you the nursing home staff gave us a HUGE box of chocolates (1.32kgs to be exact). We gratefully accepted the gift along with a bunch of flowers each! We were spoilt but knew neither of us could eat the chocolate (my mum has diabetes & I'm trying to avoid getting it!)!

So instead we thought of donating it to a local emergency services like the police station! We made a few plans that fell through but it finally happened! today I could pass that HUGE box of chocolates along!

It just so happens that a huge brushfire threatened my sisters house, & many more houses yesterday, and they had to evacuate! but my sister didn't have enough time to grab anything on her way to pick the kids up from school, not knowing it would be too dangerous to return after that! so she and her kids had the clothes on their backs & their car, my brother-in-law was at work and only had the clothes he had with him etc. it turned out that it took 150 firefighters, and several airplane water bombers all afternoon & all night to contain the situation, but contain it they did! My sister & her family was allowed to return home today.

My sister came down to my house with her kids for lunch (she didn't have any food to give them for lunch as before school they still weren't allowed to return home) so she bought them down to us & we all had lunch together!

Now my sister & I had talked about this box of chocolates a few times (after all our house/unit is tiny & the box is massive). And today we were reminded of the importance of our emergency services, particularly the fire fighters!

My sister lives down the road from their local volunteer firefighters station, so I decided to give the chocolates to her for her to give to any firefighters she came across (if they were still at the station as it was early evening). So that is what my sister did!

She dropped the chocolates in, after seeing that several cars were still at the station and gave them the chocolates & told them thank you for everything they had done to keep her house & all other houses safe in the massive blaze! The fire fighters were very thankful & my sister left in tears! She felt as blessed as I did to pass it on!

I was just grateful I still had my sister, & her family safe while men and women volunteers & career fire fighters put their lives on the line! Thank you to everyone who made a difference in that fire & all other fires here in Australia (& around the world)!

My sister & I now know how much of a blessing it is to pay it forward! 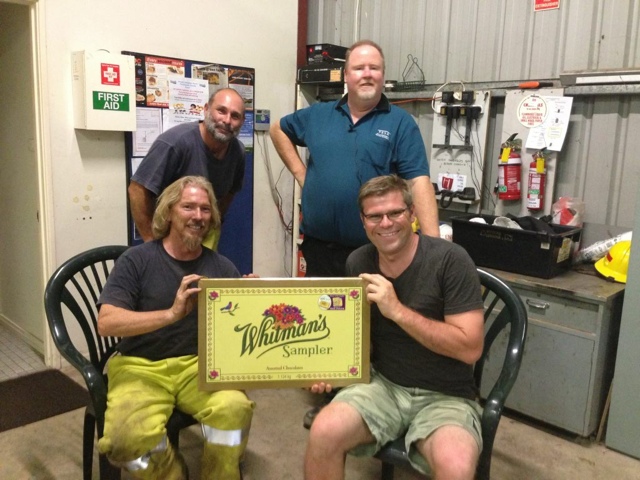