Supanova Perth - Some photos as promised.

Hey everyone,
Sorry it has been such a long time since I posted last. I think the last one was just after my birthday! so almost a month! WOW... and woops!

I have been house-sitting and puppy sitting (a very sick puppy - who needed to be hand-fed/fed four hourly). I also helped organize and run a wedding for some friends and been doing other bits and pieces that has generally made me a very busy girl! :) However, even through it all, i have continued to do my kindness a day, and some of these things have been included in my kindnesses for those days! or are on top of the kindnesses I did!

Anyway, what I had promised was photos from my birthday weekend at SUPANOVA Perth!
I met some awesome actors and authors and got to see and buy some amazing things! I even got some of my own books signed! Now for those that have read this blog regualarly or know me well know that I absolutly ADORE books! So I was more interested in meeting Authors than I was in almost everything else. So I have about a thousand photos of the Authors and only a couple of the super-star actors that we met along the day.

It was a 3 day event. Starting Friday night (For those like me who wanted to meet and greet and discover stuff that others dont get to see!). I got to go to a small gathering of people who got to listen to a talk given by Eric Roberts (Julia Roberts brother) and also a guy who plays some awesome villains. He was in the Dr Who movie and was also in "The Dark Knight" the second installment in the Batman Trilogy. For a guy who plays such amazing villains, he was a really lovely guy and he answered lots of questions and answered politely and happily. I think I became a fan of his at this talk! 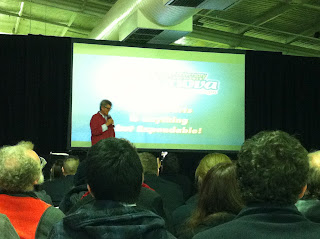 Saturday I headed into Supanova alone and listened to some awesome talks and discussions given my various people. I also got to get some photos signed by some of my favorite people. So VERY happy.

On Sunday, my friend, Taylor and I made our way in to Supanova together! And we had a blast. We got to meet our favorite authors face to face and in some cases get photos with them! So cool! 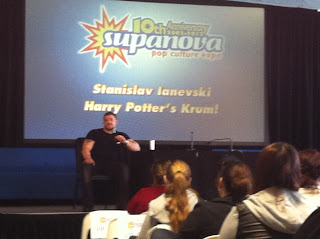