So last month I finally got around to doing the Kindnesses for January! And in the new format they are much easier to post! And I will shortly write up the ones for February...

The terrible thing is that after loosing one lot of kindness due to technology, I had believed I had fixed the problem. However... technology seems to thwart me at every turn, and i lost a lot more of my kindnesses, so I have had to AGAIN got back through the books/diaries/photos/text messages/personal messages/Facebook to try and figure out exactly what I have been doing. Needless to say, I have given up on the technological recording of kindnesses and have gone back to simply writing them down in my diary!

Please note, that my "cop out" clause for not finding any evidence that I had done a kindness on a particular day was to write that "I made mum a cup of tea". I do this almost everyday anyways, and she doesn't usually wake up unless she has had one. So I find it a kindness... maybe I should be writing "Woke mum up nicely" as well... but I know that I have done a kind deed everyday, even if i cant recall EXACTLY what it was, we all know... at least mum got a nice wake up and warm tea in her belly! :)

Anyways, here is the kindnesses for February:

February 1st: I passed on a letter and read it aloud to my dad who had received it from a friend who had just been to India!

February 2nd: I helped an elderly neighbor carry several bags of craft supplies upstairs to her house. I also helped a friend photograph about 20 of her quilts for the charities she supports.

February 3rd: I helped look after my Niece and Nephew  whilst their parents were at a dinner party.

February 4th:I made a dip for my mother to take to a gathering of her friends. Whilst she was out I cleaned the whole house, Including changing all of the sheets, Vacuuming, doing the laundry, doing the washing up, and sorting out problem areas of the house so when she returned the house was clean and uncluttered - A wonderful surprise.

February 5th: I took on the role of chef for the afternoon/evening and cooked lunch and dinner for both mum and I when she was having a very hard day.

February 6th: I encouraged my mum and helped her walk to my dads nursing home and back. I also supported by sisters business.

February 7th: I met up with my cousin who was in town, over from Melbourne (other side of the country), shared breakfast together before she had to return back for work, we also sent a card back with her for another family member.

February 8th: Visited my dad in his nursing home, only to discover one of his fellow housemates had passed away. Mum and I supported the family, whom we had gotten to know, and sent love to those who werent at the home then.
Mum and I also dropped flowers off to a friend who was having a particularly rough time of it. And  also helped my sister by baby sitting for a few hours.

February 9th: I made a chocolate cake for a friends birthday.

February 10th: cooked dinner with my neice and nephew, and supported my mum after a particularly hard day.

February 11th: Dropped off a birthday cake to a friends house, and helped clean up after an Engagement Party.

February 12th: Drove mum to church, and then took her to visit a friend afterwards. I also offered to do the washing up at a friends house after we had had dinner there.

February 13th (RAK WEEK): The start of RAK week went well with mum and I inviting the neighbors to come in and have a coffee and a chat and share some afternoon tea with us.
February 14th (RAK WEEK & Valentines Day): I sent messages to my close single friends to wish them a Happy Valentines Day (so they had a valentine). I also took myself to Kingspark Botanic Gardens, for some Kindness to myself. I had a Soy Chai Latte, and a big blueberry muffin and celebrated life as a single woman in the beauty of the park. I also contentedly watched all those couples who were together on Valentines walking through the part together, and was grateful that one day I will also be able to share Valentines day with the person I love. 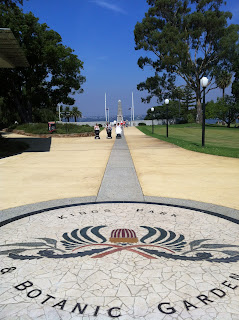 February 16th (RAK WEEK): I helped my mum walk down to my dads house, and made the effort to smile at 5 strangers.

February 18th (RAK WEEK): made the effort to talk to at least 5 strangers that I met throughout my day. I also organized a cake for my Nieces birthday party.

February 19th (RAK WEEK & My nieces 4th birthday party): I took responsibility of looking after dad, taking him to the toilet, keeping him well hydrated and keeping him out of the way of screaming/enthusiastic 4 year old girls. I also protected the cake until it was time for the cake to be cut.

February 20th: I got up early to drive mum to a doctors appointment. I also bought her lunch.

February 21st: Took mum to a doctors appointment and then walked across to the hospital. She was admitted into hospital for surgery on her spine. I stayed with her until after closing hours. And I also held the elevator doors open for someone I didn't know.

February 22nd: Whilst mum was in surgery, they moved wards, as a bed became free. So i moved all her stuff to the new ward sot he hospital staff didn't have to do it. Also kept everyone informed about mums surgery, particularly friends and family.

February 23rd: Smiled at a sad looking stranger, who smiled back. I also continued to look after mums needs at the hospital and kept everyone informed.

February 24th: Changed the sheets at home on both the beds, and did the washing, ready to bring mum home after her stay in hospital.

February 25: Waited at the hospital for several hours until the doctor came and told mum she could go home. I took responsibility for her after surgery care by learning how to do the neck massage therapy and mums medications roster.

I also made cups of tea for those who supported us by bringing dinner and care packages. THANK YOU so much to those that did this for us. You were life savers! :)

February 26th: Continued to take responsibility from mums massage therapy and medications. I also acted as mums secretary and made phone calls and informed people/doctors of progress.

February 27th: Looked after mum, who was still fairly bed ridden, and sorted out medications and changed her neck dressings. (Nurse Daena to the rescue! lol).

February 28th: Mum had her first outing and I made sure she didn't overdo it too much, and took her home as soon as she was very tired.

February 29th (Leap year day): I took mum out for a leisurely lunch (she was going stir crazy at home) and then we did some very brief food shopping before I took her home, as she was exhausted.

Well folks that was my February. Like I have said in previous posts, about mums hospital visit, I really take my hat off to the doctors, nurses and people who care. It is not an easy job to do, but it makes the world of difference to people like my mum and those who are suffering. Thank you!

Anyway, I hope you enjoyed reading this, as it is just a tiny incite into my life.