ANZAC day... Lest We Forget

Hey Everyone,
Life had been a little complicated recently so I have been struggling to keep writing on here. To be honest this is the first time in about 10 days that i have even made it to the computer to sit down and write something... Anything! Mum has had post-surgery complications, so I ask for all those who pray/meditate/send positive vibes (etc.) if you could possibly spare a thought for mum at the moment! That would be amazing! :) Thanks!

For those of you who are unfamiliar with ANZAC day... here are some brief notes about it!

ANZAC stands for the Australian and New Zealand Army Corps. ANZAC day marks the anniversary of the first major military action fought by both the Australian and the New Zealand forces during the First World War. This was a collaboration to take the Gallipoli peninsular in Turkey. Things went badly for the ANZAC's but the spirit and mate-ship, that endured in an impossible situation, is an inspiration to Australians and New Zealanders today! (If you want to know more about the history of the ANZAC day tradition please check out the Australian War Memorial Website at http://www.awm.gov.au/commemoration/anzac/anzac_tradition.asp 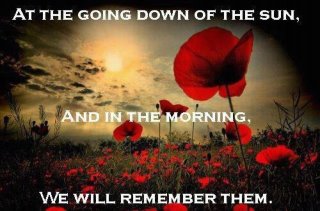