GOBSMACKED? you should be... July Kindnesses

Hey Everyone,
How many of you logged on to the blog today, just to see if i managed to keep the ball rolling and post the July Kindnesses? (I did... but i dont think i count! :)

So there are lots of photos in this one... because i was a very busy beaver and did a whole range of stuff... from looking after sick doggies, to helping at quiz nights, to planning weddings, to baking cakes for everything, and singing.

So I hope you enjoy this fun filled installment of the 2012 kindnesses.

July 3: I prepared a whole lot of stuff ready for a wedding soon. I even started to decorate some glass wear. 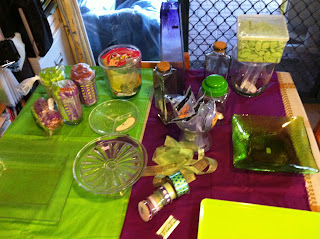 July 4: Prepared fruit for making a wedding cake and Visited Amber in hospital (she lost a lot of weight but was happy to see us).

July 5: Clearned up the house of the friend whilst they were away.

July 6: Mum and I baked 80 cupcakes ready to help out at a quiz night. I also helped set up the hall for the fundraising quiz night!

July 7: Did a lot of work for the Quiz night. Including taking/iciing cupcakes, helping set up and singing in the guest band. Amber returned home from the hospital and we took up 4 hourly feeding rosters.

July 8: Sent a thank you message to two friends who had bought me a birthday gift and helped friends get ready for their wedding. Got up early to do the early morning feeds for Amber (7am).

July 9: Continued to look after a very sick dog. Feeding and getting her up to go to the toilet every four hours.

July 10: bought a cake for one of the craft ladies birthdays.

July 11: Did some full on wedding preparation, with another girl Em (she and i had been conscripted to do the afternoon tea for the wedding together). Bought more lollies, did placement plans for the afternoon tea and did a lot more glass decorating at my house. Then returned to the house we were house-sitting, and Amber's medications had to change so we had to start getting up earlier (6am) to give her medication before her food at 7am.

July 12: I did some washing, cleaning, vacuuming and pet care at a friends house.

July 13: Got the last of the lollies to pack into glass ware, waited for someone to drop off the key for the venue and also did a huge amount of packing and also finished creating trees out of dead branches. Did the final touches to the wedding cake.


July 14 (THE WEDDING): Returned to my house for 9am to pack the last of the glassware, lollies and cutlery into boxes, 10am people came to fill their cars with boxes and take to the venue(Em took the key and opened up the venue and started setting up whilst i was still packing peoples cars). Then I left my house to get to the Venue at 11am. Decorated the hall completely with many helpers (thanks guys... you rocked). Went to the wedding at 1pm. (Whilst we hosted the afternoon tea – mum took the awesome cake to the reception venue with some help). Had the afternoon tea from 2pm-3.30pm. Then had to pack it all up again. Finished packing at around 5pm. Had a celebratory/exhausted pre-dinner snack at 5.15pm. Had the reception at 6pm. Party over by 11pm and I was in bed after taking Amber for a midnight toilet break.

July 15: Looked after myself by having a “rest” day – but still kept doing the pet care regime.

July 16: Did the early shift of pet care so mum could get some much needed rest. Sent messages of love to a family who had just lost their loved one at dads nursing home.

July 17: Cleaned the house and make the house look awesome and cleaner that before we picked up the house owners from the airport. We did the best to make it look really clean and welcoming because they were going to have their own hands full looking after a very sick dog when they got home.

July 18: Helped a friend build an Architectural model and helped cheer up a sad friend.
July 19: walked a friend to her car in a dodgy neighbourhood late at night. Provided some friends with endless amounts of amusement because I got a fit of the giggles that last about half an hour.

July 20: I visited a sick friend and spent some time baking with my niece and nephew.

July 21: Organised some “feel good movies” for mum as she wasn’t very well.

July 22: Invited one of our neighbours in for a coffee and a chat.

July 23: Made a CD of my favourite songs and gave it to a friend.

July 24: did the washing up at craft and make cups of tea for mum and offered to do the same for the other craft ladies.

July 25: Helped a friend out by holding Blankets so she could photograph them before she sent them off to a charity,

July 26: Volunteered to help at a Community Day at my dads nursing home and attended an organizing committee meeting for it.

July 27: Baked over 120 cupcakes in preparation for an engagement party – Iced them late in the evening and also made and decorated a BIG cake too.

July 28: Took Big cake and cupcakes to the engagement party and made it all look very pretty! :)

July 29: Spent all day at my sisters house getting my Kindnesses in order and putting them all in a photo album to show non-technical/computer using people what I am doing and all about this project (Similar to last years scrap booking album).

July 30: Helped a lady when her baby pram fell over! Thankfully this happened just after (and possibly as a result), the baby was removed from the pram.

July 31: Bought a drink for a friend at a pub. I also started crocheting a friends birthday present (you will see the photos of it in the August Kindnesses).

NOTE (at present): Amber the dog is still alive and is miraculously doing better. She lost lots of weight and is on a very restricted diet. She is still on four-six hourly feeds but her attitude and energy levels have increased to the point that she can play and toilet herself. She has even been up to her old hints of mischief (much to the frustration of her human mummy). Mum and I keep cuddling her, when we visit her and her sister Ebony (and their cat brother Spyder). Amber, Ebony, & Spyder are like family to mum and I, we have known them for such a long time, the world would be a sadder place without any one of them. Even though it was tough to look after Amber when she was sick, and whilst her owners were away, we are in no way bitter about looking after her. We are glad she has survived, against all odds. She is such a special dog and she is cherished by us and by her owners. The owners appreciated our hard work and effort by showering us with gifts and gratitude. Which we indeed grateful for, but that Amber survived for her owners to see again, that was the true gift!

So, four times in four days (and yes, when i started writing this it was on the fourth day... although technically I'm pretty sure its a new day), is pretty good for me. I am almost up to date! :) HOORAY for small miracles.

I hope you have enjoyed the photos, the stories and the kindnesses.I am glad i have been able to make peoples lives and special days that bit more special! :)

May this find you in health and happiness,
luv Daena X