Sometimes we have great plans and sometimes it just doesn't happen.
I've been working really hard to post daily but it didn't quite go to plan yesterday. Yesterday I took my niece down to the park and when I was there I got the starting of a migraine. My sister thankfully was on her way from work so she was able to swing past and pick us both up and take us home.
By the time I got home I was nauseous and by the time I had had a chance to fill up my water bottle and make sure I had an ice pack I was vomiting. Great topic of conversation, I know. Hehehe. I then proceeded to sleep from 5pm to 11.30am when I was taken to the doctor and then back to bed until almost 6pm. I had basically spent 24 hours in bed (excluding the time I was at the doctors). 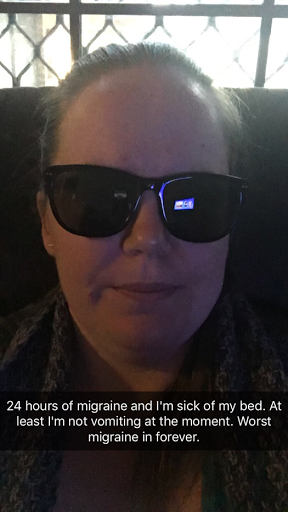 Needless to say, by this evening I felt much better, although not 100%. But I got sick and tired of being in bed so I got up. I Had dinner with my family, watched some tv (fairly quietly) with the adults in my family and played a game of cards with my brother in law. All with my sun glasses on!
Even though I was sick I didn't forget I had to do two days worth of blog posts. I'm making it short and sweet today because I need to.
Yesterday's giving was another toy. 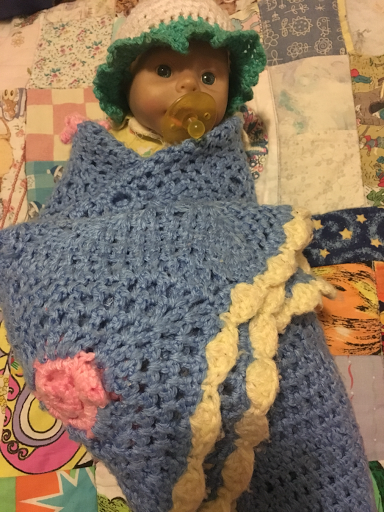 I've had this "baby" doll for as long as I can remember. But I don't need it anymore and I know there is some little kid out there who will love her like I did when I was younger. So I think she would be in better hands than mine where she can be loved and appreciated.
Today's act of kindness and gifting is also a toy. A "Big Bang Theory" kitty cat called "soft kitty". When you press its paw it sings the soft kitty song that Sheldon makes Penny sing when he's sick in the TV show "Big Bang Theory". See the clip below.
I was actually given two of these toys a couple of years ago. My niece loved one so much that she used to use it all the time when I didn't live with her. She would crawl into the guest bed with the Soft Kitty and play it over and over and over and over again. The batteries almost died in it from being played so often. She loved it and it apparently reminded her of me. So when she was feeling bad she would climb into the bed I used and hug my toy. Kind of cute. But since I've been living in the same house she has been hugging me and not the toy so it's time to give it up. 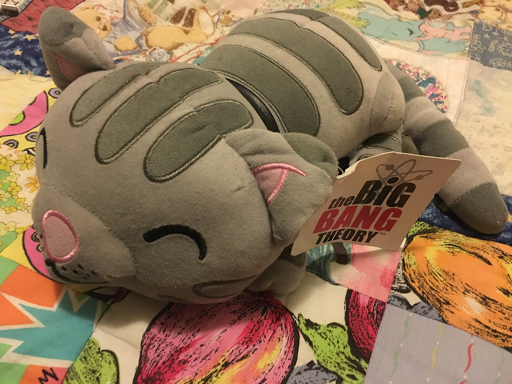 I gave one away a few months back. But I thinks it's time I pass this cutie off as well. If my niece got some much out of it when she was younger, someone else will love it too.
I want to make people's lives better. If by giving away some of my stuff I can do that then I am thrilled to.
My Lenten gifting is not my only act of kindness in the 40 days of lent (which ends on Palm Sunday) but it is one that I feel comfortable photographing and sharing. Sometimes I do kindnesses anonymously so I can't share them here without giving myself away. Sometimes I do kindnesses that other people know about so I can share them and I do here or on Facebook. Sometimes I don't tell anyone because it's not something that I could share without sharing personal information or share something that isn't mine to tell. Kindness is also shown in my discretion.
But the lent gifting I can share because I is mine. I can show you what I'm giving away because often I don't know who it will end up with. I have no attachment to who gets it or where it goes. It is also something that I am giving up for the benefit of another person, group or community. What better Kindness can I do that giving away something every day in Lent? And tomorrow is the end for this "game". Although technically each Sunday during lent isn't counted so it really ends on the Thursday before Easter. Tomorrow is Palm Sunday and the beginning of what the Christian church calls Holy Week. The beginning of all the events that lead up to the crucifixion on Friday and the resurrection on Sunday.
Even though lent doesn't end until Thursday most people I know give stuff up until Easter Sunday. So it's really a choice to how far you go. I will see how I go tomorrow I may even continue to give things up for charity until Easter Sunday just to push myself. I still have Heaps of stuff in my home that I Could regift. But if you are playing this gifting game too... please feel free to finish whenever you feel you want to.
Hope this finds you well.
Love Daena x
Posted by 365 Days of Kindness at 11:40 PM